Northern Serbia is divided in three regions: Srem, Banat and Bačka, and those three regions are making one part of Serbia, which is called Vojvodina, pronounced as ’Voyvodina’.
The fertile plain of Vojvodina once was the bottom of the Pannonian Sea that had flown down with Danube to The Black Sea. This region today represents special cultural and historical entity.

Conquering the native tribes the Romans had reigned the area of Pannonia, but not entirely. The Romans seized Srem in 1st century AD and Banat not earlier than 2nd century AD. Srem was a part of Pannonia province, Banat belonged to Dacia province, while Bačka remained out of the borders of the Roman territory.
The modern city of Sremska Mitrovica, called Sirmium in ancient times, was one of the four main cities of the Roman Empire. After the fall of the West Roman Empire, many nations ruled this territory, such as Byzantines, Francs, Hungarians, Turks, Austrians until the year of 1918, when Vojvodina became part of the Kingdom of Serbs, Croats and Slovenians, later the Kingdom of Yugoslavia. After the Breakup of Yugoslavia in 1991, Vojvodina became the integral part of the Republic of Serbia.
Because of the historical specificity and being part of the multinational empire such was the Austro-Hungarian Empire, cities of Vojvodina nowadays have the unique atmosphere that comes with their cultural and historical heritage. 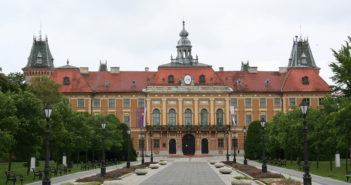 CASTLES AND CITIES OF VOJVODINA